“Often the best acting is that which is done without speaking.”  Brian Kelly (director of The Gathering?

Much like James Alexander Malcolm MacKenzie Fraser aka Red Jamie aka Mac Dubh, people ascribe a lot of names to actor Sam Heughan, the man who has brought him to life since 2014 on Starz Outlander. Recently newbie Starz exec Jeffrey Hirsch caused a major kebbie lebbie in the Outlander fandom by referring to Sam as “eye candy”, saying his shirtless physique is one of the bonus’ us vapid “premium females” drool over and enjoy.  This is not to say we don’t enjoy the sight of a shirtless Sam, (I dare say most of us do), it’s just we know there is so much more to him than his pecs.

For years many of us (we must be the non-premium females??) have been giving push back to those adjectives that only revolved around Sam’s handsome face or manly physique, trying, and (I thought) succeeding, to gain recognition for his stellar performance as Jamie.  So thanks for setting us all back five years Jeffrey, we really appreciate it.  Really… (You know what else we need – a sarcasm font…)

But enough of that, let’s set Jeffrey aside (yes, please, let’s do) and talk about what, for several years now, has been my (non-premium female name) for Sam Heughan, and that is “The Master of Subtle.”

Why subtle?  Because so much of what Sam does as Jamie is exactly that; delicate, complex, understated but still speaking volumes and, deceptively quick.  In most cases, not lines but unspoken actions, taking place in five seconds or less – but packing a mighty big punch.

Today I want to focus on what I consider to be the “eye candy” Jamie moments, one of the many micro-actions that have earned “The Master of Subtle” title and I want to start with three from the very first episode, Season 1, episode 1 – Sassenach.

I don’t know about you, but when I watched Sassenach I had never heard of the books, Diana Gabaldon, or JAMMF, nobody had recommended the show, I watched it because it was set in Scotland, period.  Like Jon Snow, I knew nothing.

My first hint at Sam’s abilities? This eye candy moment: 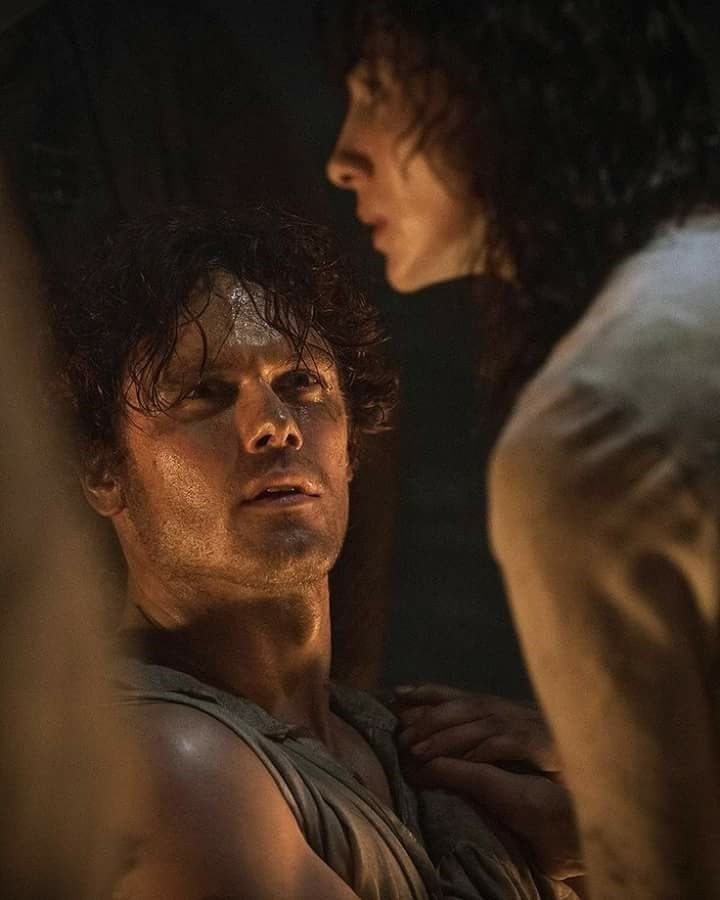 It’s the briefest of looks, blink once and you might miss it but wow, did it make an impression.  “WHO are you?” it said and I remember thinking, he’s a goner, completely smitten.  It came as no surprise to me when, two years later, I read this quote by Sam:

“The moment he sees her, I think, is the moment he falls for her.  I tried to play it in that moment, and I think you can see it.”

Yes, we certainly could, not only see it – but FEEL it.  And, sidebar Mr. Hirsch, this scene hooked me without any shirt removal or bare nipples.  Even if there had been bare nipples, I was too engrossed in the look on his face to focus on anything else.  I think they call that “good acting.”

Second eye candy moment – this one:

Which I now fondly describe as the moment I fell in love with Jamie Fraser and the Outlander universe (note to Jeffrey, no exposed nipples in this one either…)

Take a good look at Sam’s face at the start of this scene.  His eyes are all about menace and intensity –

But his lips? They’re telling a different story….

…..and here, before he even delivers his famous “d’ye want me to throw you over my shoulder” line we already know that Jamie has a wicked good sense of humor (and I might add, we also knew that Sam Heughan had already mastered Jamie’s famous “half grin.”)  Same scene, same moment, all I did was crop the same photo.  I imagine it’s pretty hard for an actor to pull off two such diverse emotions at the same time.  For me it was eye candy perfection.

Third eye candy moment? This one: 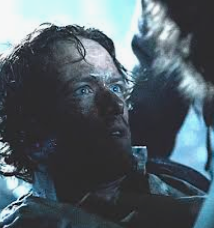 If moment one is “who are you?,” this eye candy moment said not only “what are you?” but more importantly –“WHEN are you?”  And I’m telling you Jeffrey, if I could walk into this show cold and get all that out of a few moments of non-verbal, nipple free close ups, well, that’s the very best kind of eye candy.

But that is just the beginning, there are so many more Jamie eye candy moments in season 1, SO.MANY.MOMENTS.

How about this one? 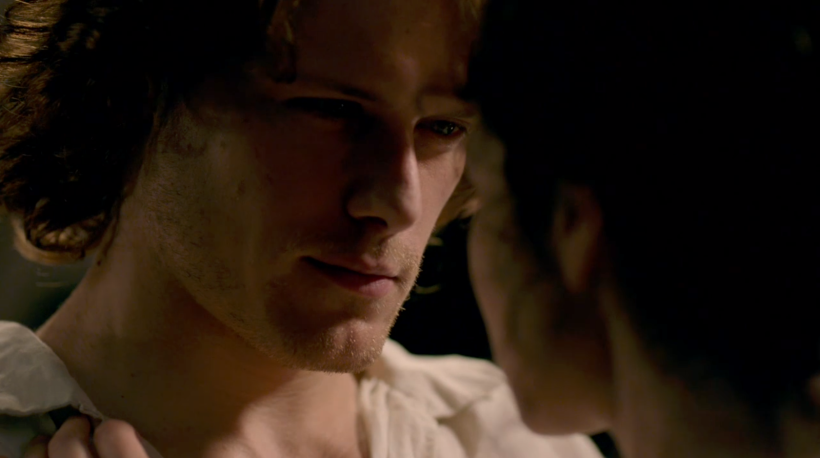 Nobody does smolder like Sam, nobody….and look how he’s sneaking in that half grin. I will concede to Mr. Hirsch, the man oozes sex appeal but that’s not why we watch….most of the time.

In fact compare and contrast these two moments, they’re eye candy – but not the kind he was referring to: 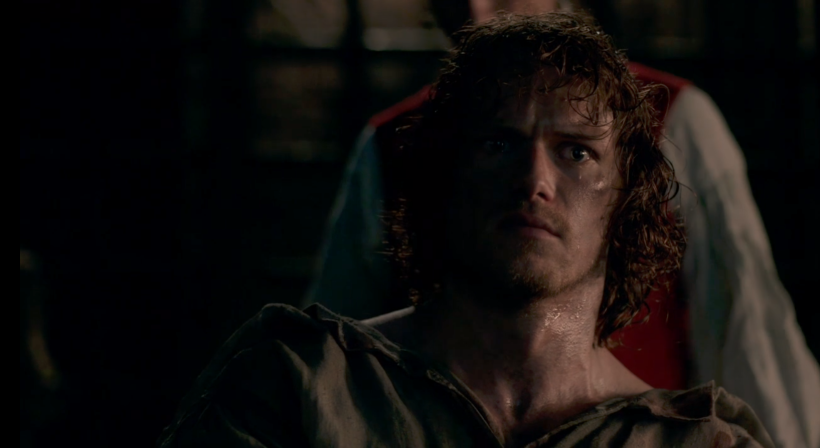 Who needs words?  The story is right here in Jamie’s eyes.

I could go on and on through the seasons but if I did this blog post would be of Biblical proportions so I will instead, leave you with these visuals: The Battle Joined, in my opinion, some of Sam’s finest work.  An episode spent lying completely still.  So much conveyed using so little – all the feels…..and no nipples either… 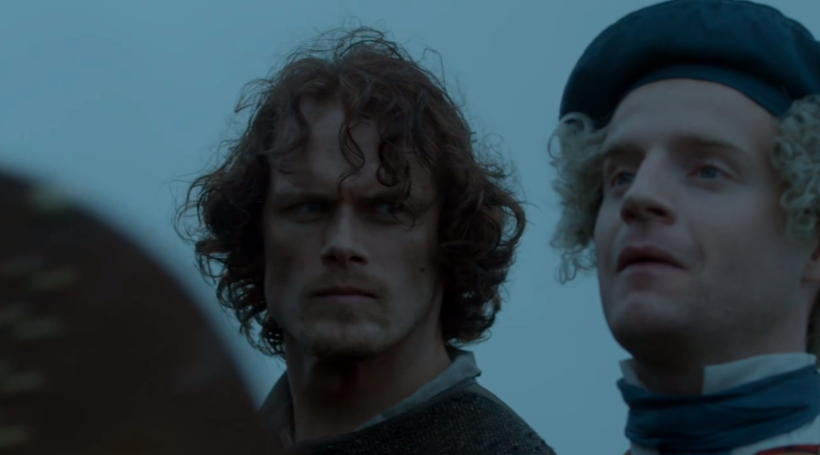 If looks could kill, Charlie would be a dead man – and this look lasted about 2 seconds, that’s subtle. 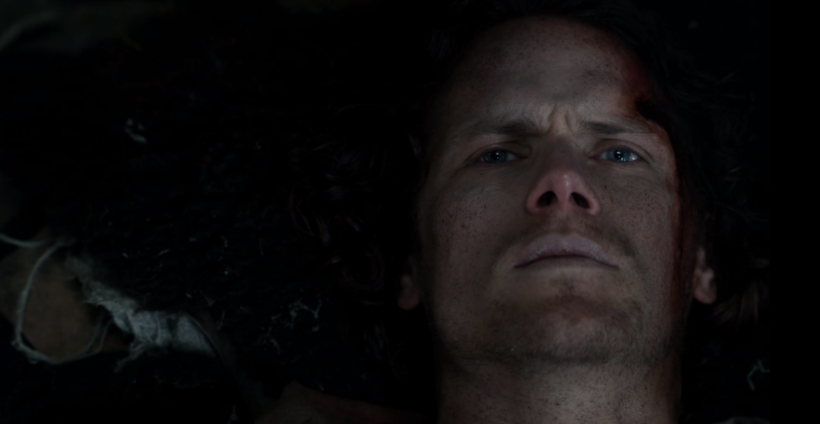 Good bye Rupert, who didn’t cry along with Jamie?  Here…., 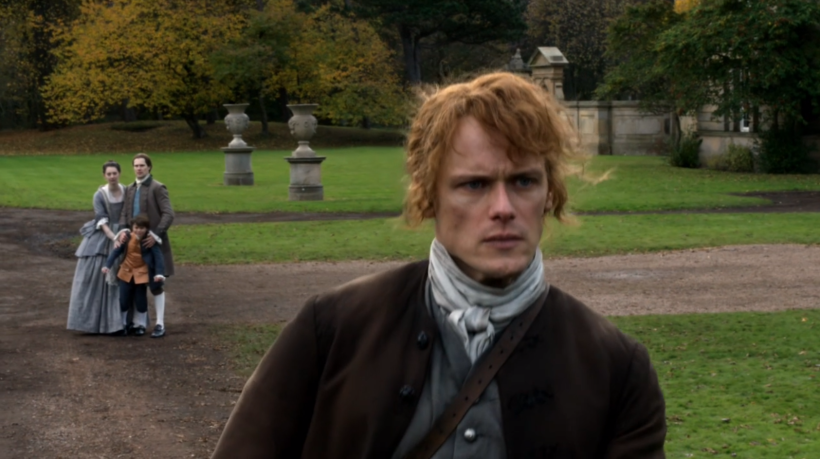 ….or here?  The facial changes in this scene were amazing and heart wrenching.  Reading Voyager, I never fully understood how hard it was for Jamie to leave Willie until Sam made me see it. 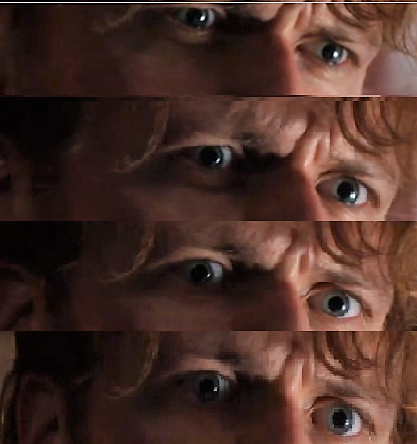 Ditto with A. Malcolm, those eyes….

And then season 4 – the happy and the sad moments: and finding a lost daughter: 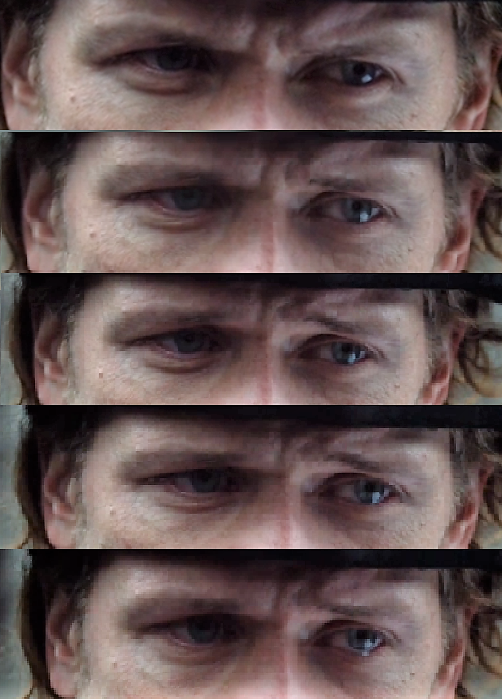 And we felt every one of those subtle shifts…. The fury of a father… And the loss of one who has been like a son.

This Jeffrey, THIS.  These are the eye candy moments we watch Outlander for and if you truly think it’s for all of us to get a little titter whenever Sam takes his shirt off, well then, I feel sorry for you and for us, because you really don’t have a clue what you’re selling.

It’s the moments that touch our hearts, the enduring relationship between these two characters we love, it’s their story and they’re the reason we tune in.  This, Jeffrey THIS is why we watch.