I bet I started this blog over a hundred times today, each time looking at my words and wondering if I was being too harsh…to easy…or somewhere in between that didn’t aptly express my feelings on the episode.  So, I think I’ll just start with a wish sent out to the universe…

Please oh please can TPTB at Outlander hire a writer that can write a strong woman without turning her into a bitch?

I didn’t like this episode.   I thought I would, it started out good enough with the sweet moments between Jamie and his daughter but interspersed with those were scenes that put the show in a hand-basket on its way to hell.

Jamie is a physical man and sadly enough the thing he alone shares with his daughter is that they both have been a victim of rape.   His words were harsh, but an echo of what he knew floated through his daughter’s mind.  His hold was firm, yet not harsh and in a few moments, Jamie convinces Brianna what years of therapy don’t convince some.   It’s not your fault.

The moment morphs into a heart to heart between father and daughter where Jamie shows Brianna that the only thing that can undue the damage done by Blackjack and Bonnet isn’t hatred or revenge, but love and time.

Then we have the moment at the fence when Jamie and Brianna watch Claire dig peacefully in her garden (a character trait from the book I’m glad they kept.)  Brianna mentions Frank again, but only as a realization that while she thought her mother whole back in Boston, only here in that wilderness is that true. 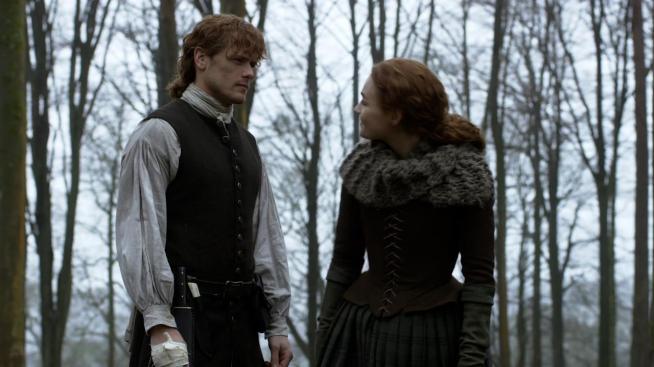 The subsequent scenes of life on the Ridge show that Brianna has found her place among these people and is reluctant to leave, baby forsooth. 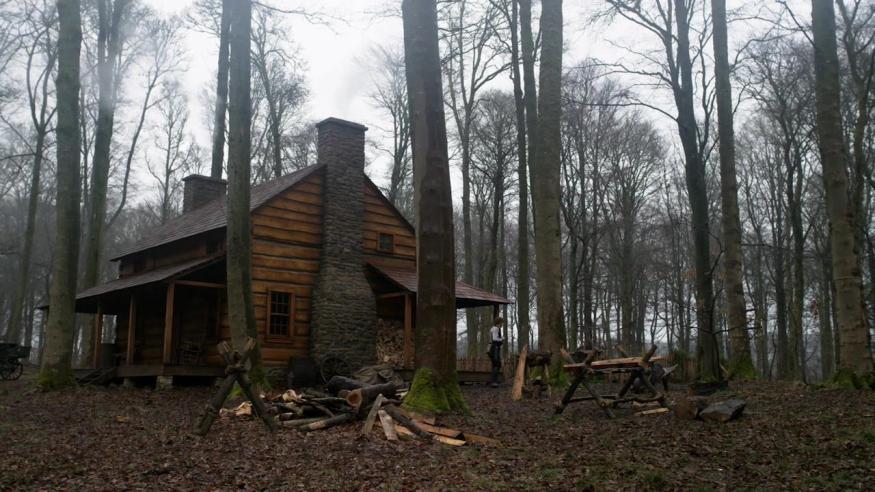 First off…Claire babies Brianna far too much for my liking, and it seems she also loses all good sense when talking to her daughter.   Brianna is the one that just happens to mention the fact that her baby might be that of the man she loves.  Really Claire?  Aren’t you supposed to be the great healer and the fact that the withdrawal method isn’t foolproof (isn’t really all that good at all honestly) slipped your mind?   Also slipped were the dangers in giving her daughter a surgical abortion in the 18th century, pain being the least of those worries.

I DETESTED the scene where Brianna and Claire listed what they missed about the future.  To a casual viewer it gave the impression that these women were forced to live in the past and not that it was a choice made for love.  (I happen to know a casual viewer and that is EXACTLY what he thought).  I think it was the writer’s very pitiful attempt to show us that no matter what she was missing, Bree would rather be in the past with her parents.  Did I mention it was a pitiful attempt?

Even though it’s in the “parts I don’t like” section, Brianna’s nightmare sequence was really well done, even if it was the impetus for Lizzie blabbing and the basket careening further toward hell.  Speaking of Lizzie….how come the ONLY person in this whole kerfuffle that should have been smacked wasn’t?

Brianna comes into the happy cabin pitching a fit and throwing around slaps.  I don’t blame Murtaugh for leaving, Brianna probably would have smacked him too.

Oh sure, Jamie beat the crap out of Roger and Ian sold him to the Indians, but Brianna better bet glad it wasn’t my dad that got hold of him.  My dad would have gutted Roger like a fish, weighted him down and put him in the cat-fish pond behind his house.  (I’m not sure one of my college boyfriends didn’t end up down there). 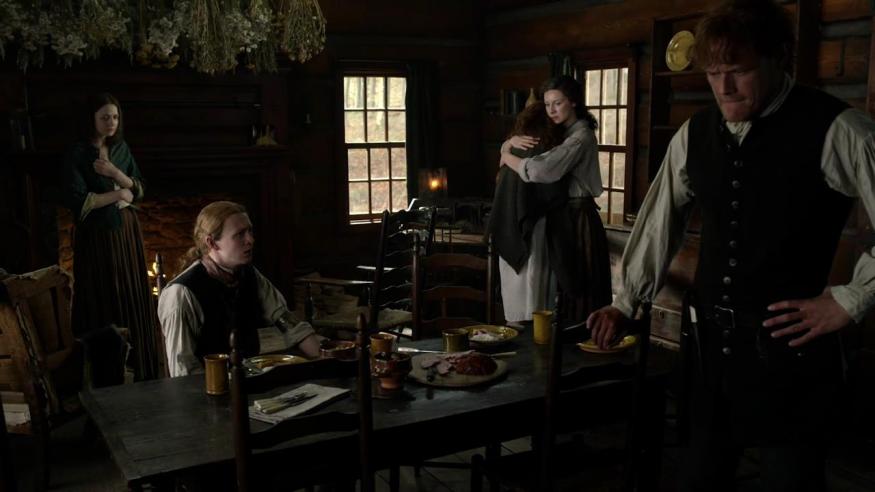 Yes, it was a calamity of errors, but to hold Jamie and Ian ultimately responsible is just plain wrong.  Jamie and Ian acted on only what they knew to be true at the time.  Had Claire and Brianna not kept the secret of Bonnet’s involvement none of this would have happened.  Both women came across as highly hypocritical and Claire’s scolding tone when she asked Jamie about Roger didn’t work at all.  I really didn’t like Claire at all in this episode.  She laid that ring down on the table with accusatory flair, but it was her secret at the heart of this mess.  I don’t expect much from Brianna in this situation, she’s young and was raised by Frank who apparently taught her she could do no wrong.  Claire however is completely out of character with her actions and reactions.   The Fraser women are responsible for this kebbie-lebbie, not the Fraser men.

Now I know some will argue that most of the episode and dialogue was taken from the book and it was, but it was acted in such a way that gave it an entirely different meaning.   Claire not taking up for Jamie when Brianna said he was untrustworthy where Roger was concerned is UNFORGIVABLE and completely out of character.

One of the main faults in this week’s episode was that it put too much emphasis on the Bree/Claire relationship and not enough on the Jamie/Bree relationship and therefore gave the show the appearance of “it’s Claire and her daughter against the savage world”,

And Jamie’s behavior, almost begging toward Brianna and Claire was just too much.  The man thought he was avenging and protecting his daughter, he should beg NO ONE for forgiveness for that.   I just can’t help but wonder, would Claire and Bree be acting so self-righteous if it had actually been Bonnet who showed up last week? 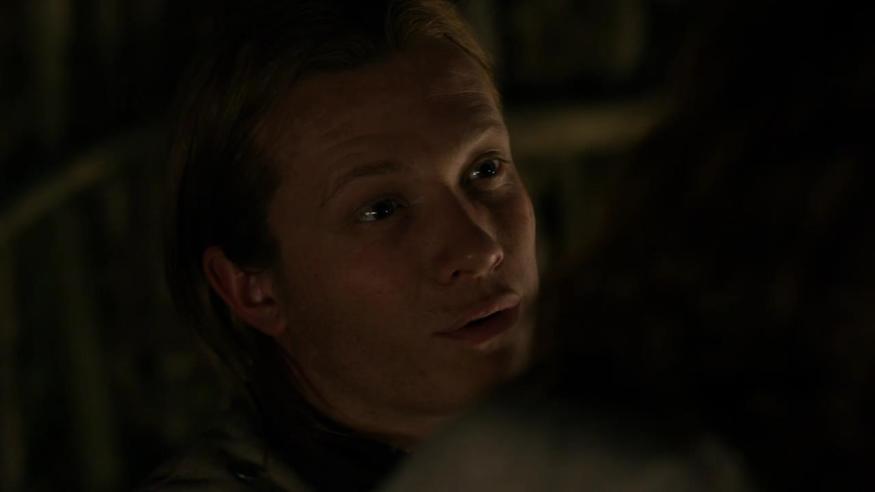 Other Things I liked:

Roger.  Despite not being able to keep from wondering just how bad he smelled, (kudos to the make-up department), I liked the Roger stuff.   He wasn’t one of these men who wore his bravado on his sleeve with loud words and actions, but kept it in the tying of knots and the determination to get back to his wife.   The heartache he felt standing in front of the stone that could save his life but separate him from the woman he loved was palpable and beautifully acted, even if it was the silliest cliffhanger Outlander has ever tried to sell.   Not to mention…. what is it with Outlander that every chase/wilderness hike has to take for freakin-ever? 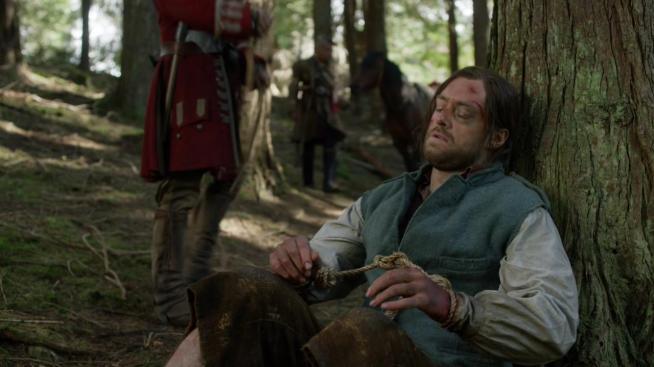 Murtaugh and Jocasta flirting.   While it’s been said by many in the know that Murtaugh won’t take the place of Duncan Innes…that doesn’t preclude him having his own “true love” with Jocasta Cameron.   I saw a few sparks during their reminiscing…Murtaugh teasing that his hands were so memorable and Jocasta’s quip that he couldn’t keep them off her sister was so adorable.  I can’t wait to see how much this couple will smolder.

Ian.   My God I love every single thing John Bell does.  From his sheepish crush on his new cousin to the way he offers himself as a substitute suitor was precious.   Even his reaction to Jamie calling him a “wee idiot” was adorable.   This is an actor that has really inhabited the character’s skin, playing him true to form. 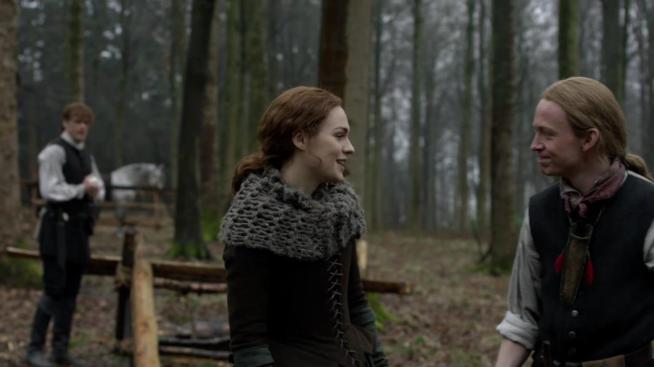 The Native Americans.  Beautifully appointed and with the horses meandering through the North Carolina (I know it’s Scotland but still.) countryside, the visuals during these scenes took my breath away.

Last week’s show was as close to perfect as it gets.   This week while technically close to the book was far off the beam acting wise.  Can I amend my original wish and say that if it’s impossible for Outlander to get a writer who writes strong women well…. can they at least get some consistency in storytelling?

3 thoughts on “The Deep Heart’s core rhymes with I am Woman, hear me Roar!”