My apologies for the lateness of the blog today but life, in the form of traffic, over 300 emails and a nasty little man in drooping pants that wanted to argue with me in the hallway of my freezing office that the heat was indeed working, got in the way.  Yet it got me to thinking about lateness, and how last night’s Outlander episode was a study in that very concept.

For Claire, lateness comes in the midst of a ship full of puking, pooping, and dying men.  Too late to stop the disease from spreading and too late to do anything for the hundreds that have died.  Too late to offer anything but comfort and maybe a sip or two of goats milk and biscuit to those she knows have no hope for anything save the cannonball taking them to the deep blue depths.  Despite being too late in realizing the intent of the British Captain, despite recognizing too late that another separation from Jamie loomed – Claire goes into commando mode because other than her love for Jamie there is one other thing that defines Claire Elizabeth Beauchamp Randall Fraser – she is a healer.  Her talk of compartmentalizing with young Elias isn’t just about the dead, it’s about putting aside her fear of never seeing Jamie again to do what must be done. 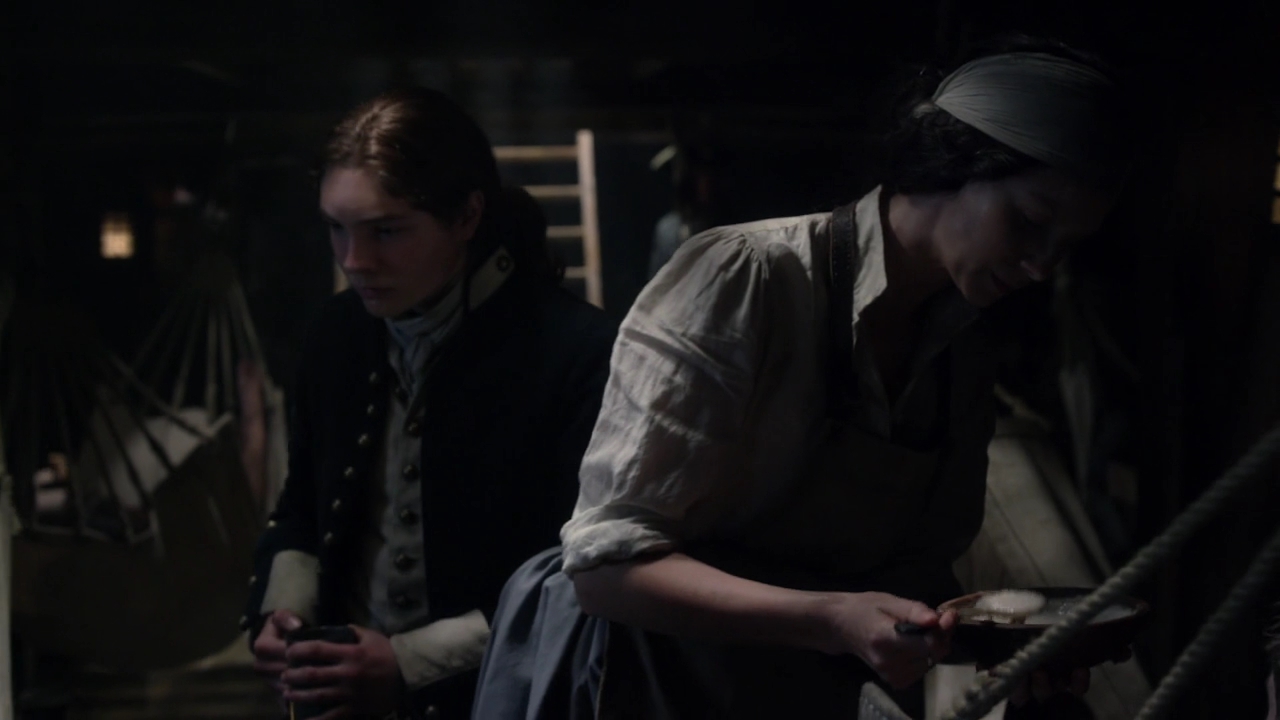 Speaking of Jamie – raise your hand if you expected him to dive into the ocean and swim after the Porpoise.  The Captain of the Artemis raised his hand.  His decision to throw Jamie into the brig wasn’t to be cruel, it was to keep Jamie from getting himself and possibly the crew killed in an ill-advised pursuit after a British man-o-war.  The Captain told Jamie too late of the message from the Porpoise to make accommodation for Claire until they reached Jamaica.  Jamie was already in panic mode by then – his worst fear of losing Claire again has come true, although by no fault of their own.

Back on the Porpoise, Claire is dealing with the hand she’s been given.  Lt. Leonard might be the acting Captain of the ship, but it’s Claire who’s giving the orders – much to the chagrin of the ship’s cook who doesn’t want to give up his galley hand regardless of the fact that he’s the instigator of the disease.  Angered at taking orders from a woman, this nasty little man tries to gain the upper hand with the age-old tactic of intimation.   What he doesn’t realize however is that Claire is a woman who has survived more than this man has seen in his life and she backs him down with the best verbal bitch-slap of the night.  What the cook doesn’t realize is that Claire is not only is fighting to save the dying sailors – but now realizes she must save Jamie as well.   When Claire finally meets Mr. Thompkins, it’s too late to prevent the inevitable tale of treason and murder.   The moment her hands clench the saw as she contemplates murder to save the man she loves we see her desperation.  When she has the tattle-tale locked in the cell next to the ship’s version of Typhoid Mary, we see her cooler head prevail, aside from a slight deviousness to avenge the injury against Jamie.

Meanwhile, our erstwhile hero is experiencing a little desperation of his own.  Locked in a cell without the help of Mr. Willoughby’s needles, and taking solace from the photographs of another love lost to him, Jamie turns his nose up at the food Fergus offers,  wanting something else from the once young pick-pocket.  I’ve seen a lot of comments angry at the blackmail Jamie used on Fergus to try and coerce his help; many say its out of character.  I say it was a perfect way to show Jamie’s fear and desperation.  Fergus reminds him that Claire cannot catch the Typhoid – but it’s not that fact that worries Jamie – it’s the 300 men to 1 woman ratio on the Porpoise.  Jamie knows all too well the cruelty of the time.

Fergus loves Claire too –and he loves Marsali – seriously were they not the cutest?  Most of all, however  – Fergus loves Jamie and he loves him enough to go against his Jamie’s wishes to escape, even if it costs him the woman he loves. Jamie accuses Fergus of not knowing love – but Fergus proves to us all he knows the meaning of that emotion all too well.   He proves it to Jamie too and finally gains the blessing he desires – to marry Marsali in Jamaica. 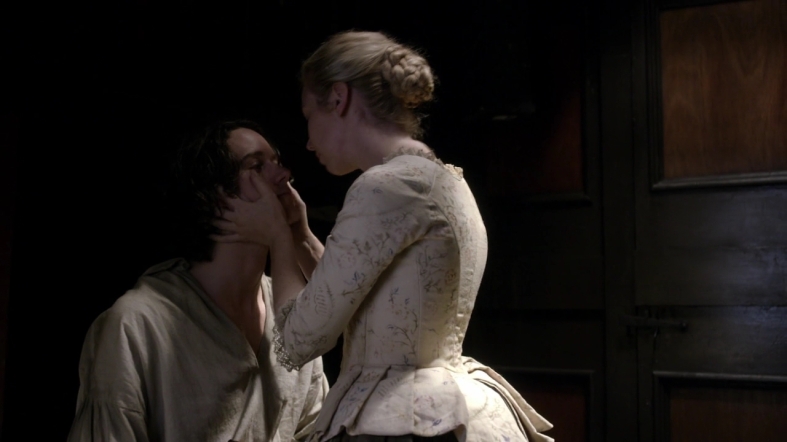 Speaking of love – let’s talk about the two characters that stole the show for me last night.  Young Elias Pound and  Annekje, who I’ve seen called the “magical goat lady”.   Elias stole our hearts just as he did Claire’s.  His respect and devotion to the healer he sees in actions touches us all just as it does Claire and she is lost to her motherly instinct for a young man who has called the sea home ever since the tender age of 7.

Claire was too late to realize Elias’s tiredness was more than a simple need for sleep.   Too late to do anything but hold his hand.  When with his last breath Elias calls for his mother – I don’t think he was calling for a woman long-since gone from his life but for one who had become surrogate to him even for a short while.  When Claire answers that call – it wasn’t pretense, but from a place deep in her heart.   I don’t know about you – but I ugly cried when Claire placed the final stitch in Elias’s shroud, unable to compartmentalize this loss, but still courageous enough to give the young lad a final honor. 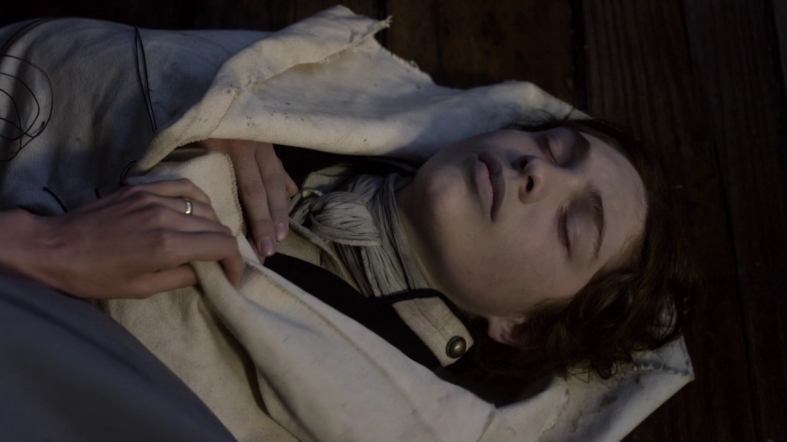 With Elias gone and the plague snuffed out – our heroine turns her attention to another mission – that of saving her husband.  With the help of Anneke, who with the simple act of giving cheese recognizes a sister in distress,  Claire attempts to escape while the goats stop for grass.  Running into young Leonard thwarts that escape, and it also shows Claire there is no talking the young Captain out of his quest for prominence with the capture of the known trader Jamie Fraser.

Jesus H. Roosevelt Christ!  Too late to now make an escape closer to shore, Annekje has another plan – you jump!   After a moment’s hesitation, love wins out and Claire strips to her skivvies and takes what is nothing more than a leap of faith.  Faith that she will not drown, faith that she won’t be eaten by sharks, faith that the current will take her to shore and most of all faith that the 200 years she has traveled won’t be in vain and she will find Jamie again – before it’s too late.